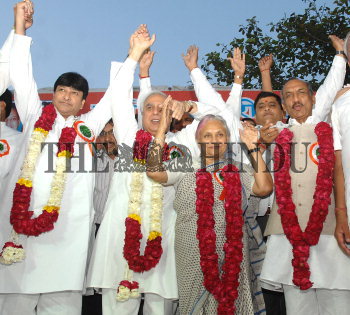 Caption : New Delhi, April 05, 2008 ---- Congress leaders led by Delhi Chief Minister, Sheila Dikshit along with Union Minister for Science and Technology Kapil Sibal, DPCC President, Jai Prakash Agarwal and Delhi Transport Minister Haroon Yusuf at a public meeting for creating awareness among the people about the salient features of the Union budget, which has not only given enormous relief to farmers, but also given tax concession and other benefits to every class and section of people, at Town Hall in New Delhi on April 05, 2008. Photo: Shanker Chakravarty