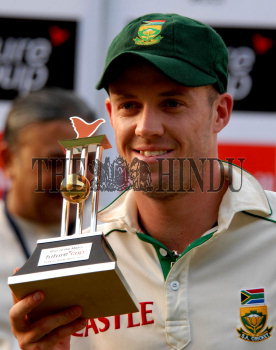 Caption : AHMEDABAD, 05/04/2008: South African cricketer A.B. de Villiers, who scored an unbeaten double century, with the Man of the Match trophy after the end of the second cricket Test match of the Future Cup series between India and South Africa at Sardar Patel Stadium in Motera, Ahmedabad, on April 05, 2008. South Africa beat India by an innings and 90 runs. Photo: K.R. Deepak