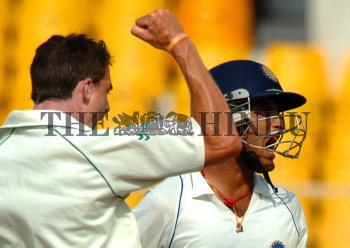 Caption : Ahmedabad:05/04/2008: Saurav Ganguly reacts after being given out as South Africa's Dale Steyn exults on the third day of the second cricket test match of the Future Cup Test series between India and South Africa at Sardar Patel Stadium, Motera, in Ahmedabad on April 05, 2008.---Photo:K.R. Deepak