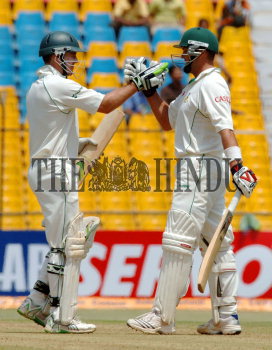 Caption : AHMEDABAD, 04/04/2008: South African batsman Jacques Kallis (right) being congratulated by his partner A.B. de Villiers on scoring a century on the second day of the second cricket Test match of the Future Cup series against India at Sardar Patel Stadium in Motera, Ahmedabad, on April 04, 2008. Photo: K.R. Deepak