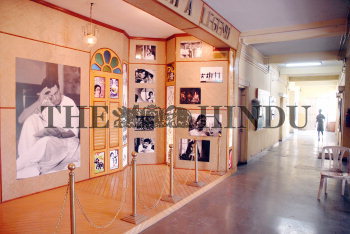 Caption : Kolkata: The long corridors of Satyajit Ray Film and Television Institute in Kolkata are silent as the premier cultural institution is on the second day of its closure due to some bizarre reason. According to the director of the institution, the contract labourers of Star Security and Detective Services did not leave the premises after the termination of the companyâs agreement on March 31, 2008 and did not allow the workers of the newly appointed G.D. Security on April 01, 2008. More over the whole episode, which has been backed by CITU, hardly have any valid reason to do so. To protect the state-of-the-art facility the administration has closed all activities and informed the local police. But, all in vain. Students and the administration have no clue about its re-opening. Photo: Arunangsu Roy Chowdhury April 03, 2008.