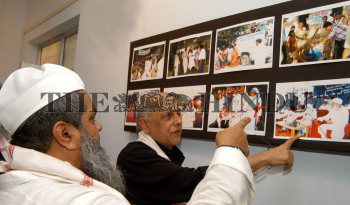 Caption : GUWAHATI, 02/04/2008 : Noted bollywood film maker Mahesh Bhatt having words with the Badaruddin Ajmal and other officials of the Ajmal Group while going through a photo exhibition during the launching of his new documentary "Torchbearer " in Guwahati on April 02, 2008. The documentary traces the vision of one of Assamās real life hero, Haji Ajmal Ali, who set up a modern hospital in one of the most backward and remotest parts of the state. This hospital has over the years helped hundreds of thousands of people, especially pregnant women, who used to die as helpless victims of maternal mortality. Photo: Ritu Raj Konwar