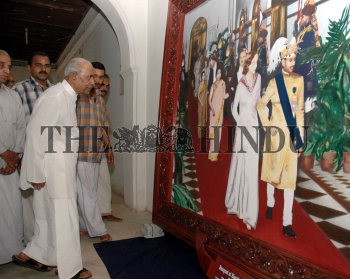 Caption : THIRUVANANTHAPURAM 02/04/2008--- A WINDOW TO THE PAST:: The head of the ruling family of erstwhile Travancore Uthradom Thirunal Marthanda Varma admires the photograph taken in 1941 during the banquet arranged at the Kanakakkunnu palace on the occasion of the birthday of the then king Chithira Thirunal. Chithira Thirunal and Mrs. Murphy the wife of the then British Resident are among those seen in the photograph. The photograph is among those displayed at the 'Travancore Museum' at the Rangavilasom palace. Marthanda Varma inaugurated the exhibition on April 02, 2008 Photo:S_Gopakumar