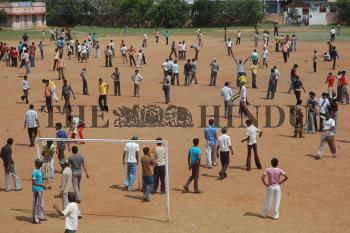 Caption : VIJAYAWADA, 30/03/2008: A number of teams share the Makineni Basavapunnaiah Stadium at Ajit Singh Nagar to play cricket and a few other games too on Sundays. Despite lack of greenery, the stadium's ground is most sought after by local youngsters for its spaciousness. Photo: Ch. Vijaya Bhaskar