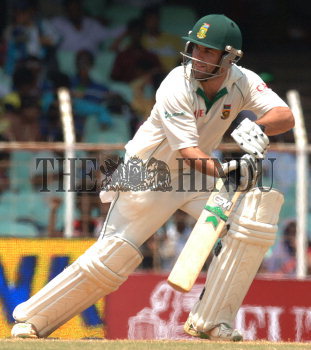 Caption : CHENNAI, 30/03/2008: South African batsman Neil McKenzie drives Harbhajan Singh (not in pic) during his unbeaten century knock in the second innings against India on the final day of the first cricket Test match of the Future Cup series at the M.A. Chidambaram Stadium in Chennai on March 30, 2008. Photo: K. Pichumani