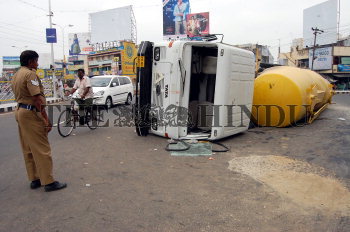 Caption : ERODE,30/03/2008: Lorry carrying fly ash from Mettur to Karur fell of its sides while the driver tried to negotiate a curve near Kalai-mattu Silai in Erode on March 30, 2008. Traffic was affected for a couple of hours. Photo: M. Govarthan