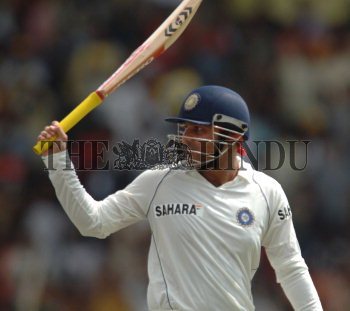 Caption : CHENNAI, 29/03/2008: Indian batsman Virender Sehwag acknowledges the cheers of the crowd while returning to pavilion after being dismissed for 319 runs at the M.A. Chidambaram Stadium on the fourth day of the first cricket Test match of the Future Cup series between India and South Africa in Chennai on March 29, 2008. Photo: V. Ganesan