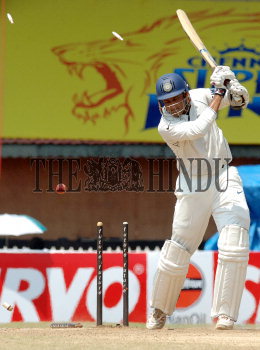 Caption : CHENNAI, 29/03/2008: Indian batsman Anil Kumble is bowled by South African bowler Dale Steyn (not in pic) on the fourth day of the first cricket Test match of the Future Cup series at the M.A. Chidambaram Stadium in Chennai on March 29, 2008. Photo: K. Pichumani