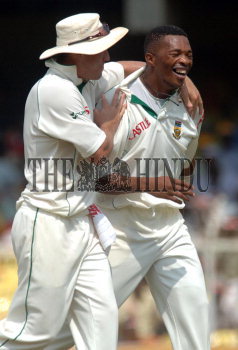 Caption : CHENNAI, 29/03/2008: South African speedster Makhaya Ntini (right) being congratulated by a teammate after dismissing Indian batsman Sachin Tendulkar (not in pic) on the fourth day of the first cricket Test match of the Future Cup series at the M.A. Chidambaram Stadium in Chennai on March 29, 2008. Photo: K. Pichumani