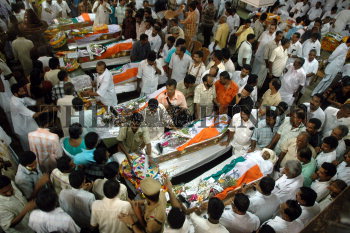 Caption : KOCHI, 28/03/2008: Public paying homage to seven who were killed in the accident at Pothanikad on March 28, 2008, when the bodies were kept at the Farmers' Cooperative Bank golden jubilee auditorium. Photo:Vipin Chandran