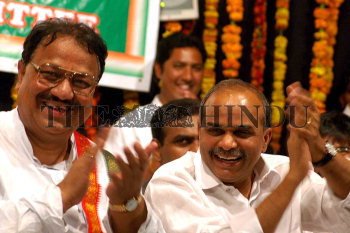 Caption : HYDERABAD, 27/03/2008: Andhra Pradesh Chief Minister Y. S. Rajasekhar Reddy rejoices at a public meeting organized during taking over ceremony of D Srinivas (left) as the Andhra Pradesh Congress Committee president for the second time at partyās head quarters, Gandhi Bhavan, in Hyderabad on March 27, 2008. He was the president when YSR led the party to a landslide victory in the 2004 Assembly and Lok Sabha polls. AICC managers think the tested Reddy-Srinivas team-work (Andhra-Telengana regional balancing act) will be the best bet against the new challenges ahead of the next electoral battle. . Photo: Mohammed Yousuf