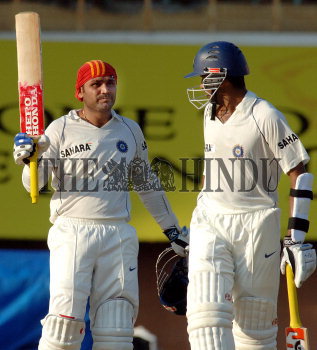 Caption : CHENNAI: 27/03/2008: Indian batsman Virender Sehwag lifts his bat after scoring a half century watched by Wasim Jaffer during the second day's play of the first cricket test match of Future Cup Series between India and South Africa played at M.A.Chidambaram Stadium, Chepauk in Chennai on March 27, 2008. . Photo: K_.Pichumani