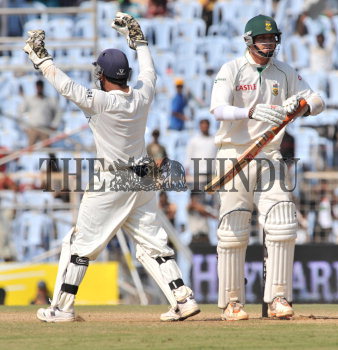 Caption : CHENNAI, 27/03/2008: Indian wicketkeeper Mahendra Singh Dhoni celebrates after taking a catch to dismiss South African batsman Paul Harris off the bowling of Harbhajan Singh (not in pic) on the second day of the first cricket Test match of the Future Cup series between India and South Africa at the M.A. Chidambaram Stadium in Chennai on March 27, 2008. Photo: V. Ganesan