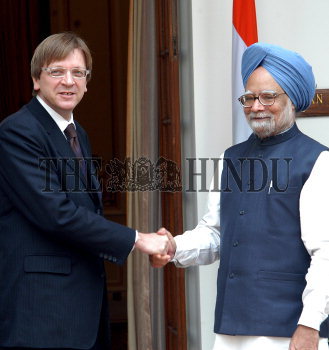 Caption : The Belgium Prime Minister, Guy Verhofstadt, with the Indian Prime Minister, Manmohan Singh, at Hyderabad House, in New Delhi on November 3, 2006. India and Belgium signed its first bilateral agreement on social security, which would exempt Indian companies from social security contribution in respect of their employees. The agreement was signed as part of the efforts to strengthen the economic relations between the two countries. Photo: Ramesh Sharma