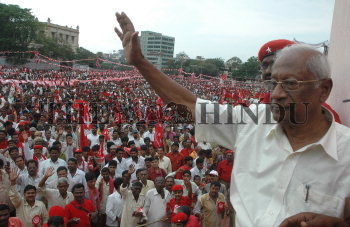 Caption : HYDERABAD, 27/03/2008: Comrade AB Bardhan, Secretary of the Communist Party of India waves to the party cadre at the rally in Nizam College Grounds at the conclusion of the 20th CPI Congress in Hyderabad on March 27, 2008. Photo: P. V. Sivakumar