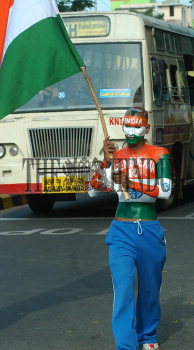 Caption : CHENNAI, 26/03/2008: Cricket enthusiast Sudheer Goutham from Bihar waves an Indian flag as he walks on the road outside the M.A. Chidambaram Stadium in Chepauk, Chennai, on the first day of the first cricket Test match of the Future Cup series between India and South Africa on March 26, 2008. Photo: S.S. Kumar