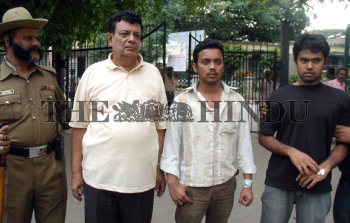 Caption : BANGALORE, 26/03/2008: (from second left) Chandrakanth Puranik, Taufiq, Anup Gopikumar passengers who was travelling in a Train from Mumbi to Bangalore who was druged mixed with softdrinks being escorted by police after the treatment at Victoria Hospital in Bangalore on March 26, 2008. Photo: V. Sreenivasa Murthy