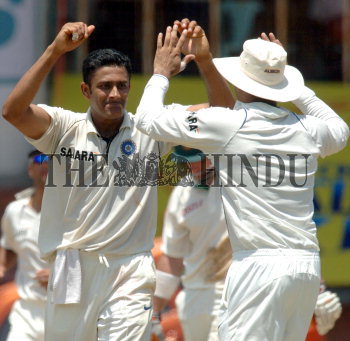 Caption : CHENNAI : 26/03/2008 : Anil Kumble Captain Indian Cricket Team exults after taking the wicket of Sounth African Cricket Team Captain Graeme Smith, caught by V.V.S.Laxman off the bowling of Anil Kumble, during the first day of the first cricket Test match of the Future Cup Test series between India and South Africa at M.A. Chidambaram Stadium at Chepauk in Chennai on March 26, 2008. Photo : K_Pichumani