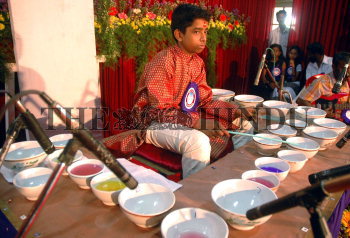 Caption : KOZHIKODE, 23/03/2008: Master M. Manu during his 'Jalatharnaga' performance at Kozhikode Town Hall on March 23, 2008 as part of his attempt to make a World record on 24 hours non stop performance on "Jalatharanga". Photo: S. Ramesh Kurup