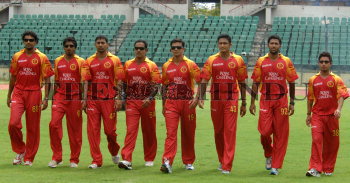 Caption : CHENNAI, 24/03/2008: Players of Royal Challengers, the Indian Premier League team from Bangalore, during a commercial shoot at the Nehru Stadium in Chennai on March 24, 2008. Photo: K. Pichumani