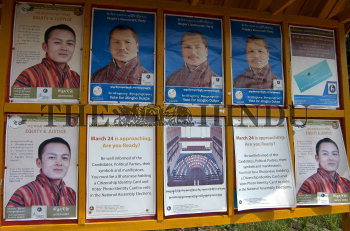 Caption : BHUTAN, 23/03/2008: Election posters in Samdrup Jongkhar district on the eve of the Butan's General Election on Sunday, March 23, 2008. The kingdom is all set to shifts from monarchy to parliamentary democracy. An estimated 400,000 voters in the Himalayan kingdom of about 600,000 people are eligible to exercise their franchise in 869 polling booths spread over 47 parliamentary constituencies. Photo: Ritu Raj Konwar