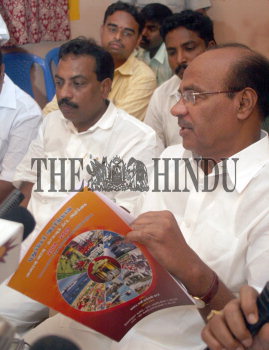 Caption : PUDUCHERRY, 23/03/2008: Pattali Makkal Katchi founder S.Ramadoss highlighting the features of the shadow budget released by him at a press conference in Puducherry on March 23, 2008. Photo: T. Singaravelou