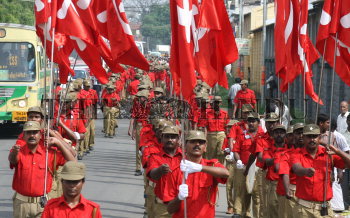 Caption : COIMBATORE, 23/03/2008: MARCHING AHEAD: Communist Party of India (Marxist) cadres take out a rally in Coimbatore on March 23, 2008 to mark the anniversary of freedom fighters Bhagat Singh, Sukhdev and Rajguru and also as part of the party's 19th congress in the city from March 29. 2008. Photo: S. Siva Saravanan