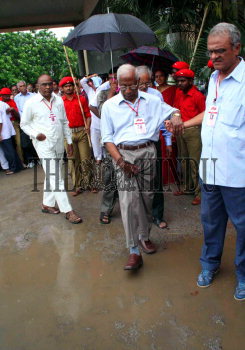 Caption : HYDERABAD, 23/03/2008: Andhra Pradesh state secretary K.Narayana extends a helping hand to the General Secretary of the Communist Party of India AB Bardhan at the inaugural session of the 20th party congress which began in Hyderabad on March 23, 2008. Photo: Mohammed Yousuf