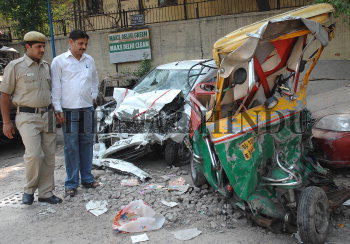 Caption : NEW DELHI, 23/03/2008: Mangled remains of a car and an autorickshaw which was involved in a head-on collision at the Delhi-Noida DND Flyover in which three people were killed and three seriously injured in New Delhi on March 23, 2008. Photo: V. Sudershan