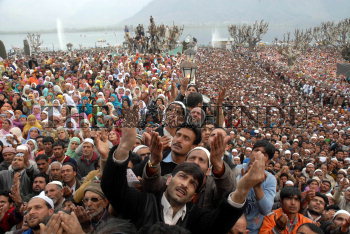 Caption : SRINAGAR, 21/03/2008: Kashmiri Muslims raise their arms as they look at the relic of Prophet Mohammad on display during the Eid Milad-un-Nabi festival at the Hazratbal shrine on the outskirts of Srinagar on March 21, 2008. Tens of Thousands of Kashmiri Muslims on March 21offered special prayers during Eid-e-Milad, or the anniversary of the birth of Prophet Mohammad, at the Hazratbal shrine, which houses a relic believed to be a hair from the Prophet's beard. Photo: Nissar Ahmad