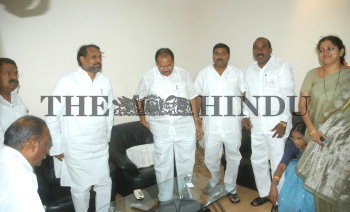 Caption : VISAKHAPATNAM, 20/03/2008: Commercial Taxes Minister Konatahala Ramakrishna and his Cabinet colleague who is in charge of the district Kanna Lakshminarayana with Mayor Pulusu Janardhana Rao and MLAs T.Gurumurthy Reddy and S.Ranga Raju, ZP Chairman G.Ramamurthy Naidu at Visakhapatnam on March 20, 2008. The ministers were here to resolve the row between the Mayor and a section of the corporators. Photo: C.V. Subrahmanyam