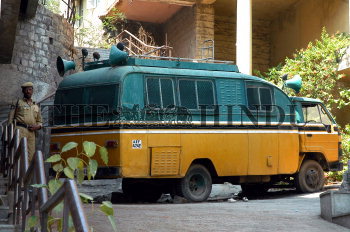 Caption : HYDERABAD, 20/03/2008: Will Chiranjeevi ride a ratham like this?: 'Chaitanya Ratham', a modified Chevrolet van that pitch forked the legendary NTR into power in 90 days, was recently in news for its famous driver, NTR's son, Harikrishna has just become a Rajya Sabha MP. The 'ratham' that spawned chariot culture in indian politics has lost its sheen lying in a garage. But speculation is rife that the Mega Star could emulate NTR and ride on a similair ratham to criss-cross the state to try his luck in politics. Photo: H. Satish