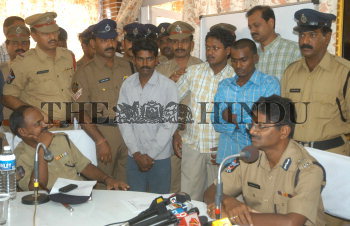 Caption : VISAKHAPATNAM, 20/03/2008: Police Commissioner N. Sambasiva Rao showing the three youth who were accused in the murder of Santoshi of Parawada mandal in Visakhapatnam district, at a media conference in the city on March 20, 2008. Photo: C.V. Subrahmanyam