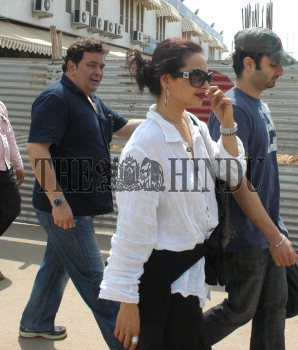 Caption : CHANDIGARH, 19/03/2008: Bollywood veteran actress Rekha and actor Rishi Kapoor arriving at Chandigarh airport on March 19, 2008 for shooting of their film in the city beautiful. Chandigarh is rapidly becoming a popular destination for filmmakers with its modern township and promotional activities extended by the local administration. Photo: Akhilesh Kumar