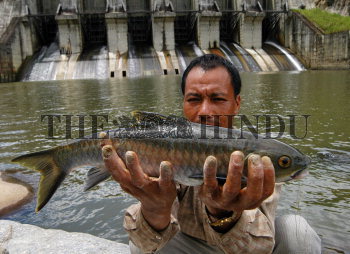 Caption : A tribal exhibiting his catch, a baby Golden Mahseer fish (tor putitora), at the dam of the Ranganadi hydel project in Arunachal Pradesh on November 2, 2006. Known to reach nine feet in length and 54 kg in weight, the Golden Mahseer is becoming extinct because of dams being built across rivers. A recent national seminar on conservation and rehabilitation of the Golden Mahseer in the rivers of the region has recommended a hatchery in Tezpur near Nameri National Park. Photo: Ritu Raj Konwar