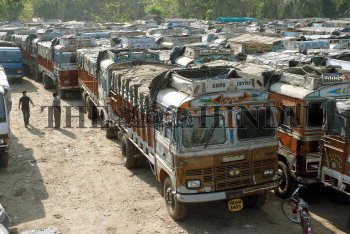 Caption : KOLKATA, 18/03/2008: Trucks exporting rice to Bangladesh from India halted at Petrapol border near Kolkata on March 18, 2008. The rice exporters are unhappy with the price war between two countries which has imposed the ban on rice export. A large number of exporters protested the ban by the Indian Government at Hilly border of West Bengal. Nearly 2000 rice loaded trucks are stranded at Petrapol border too. Photo: Arunangsu Roy Chowdhury