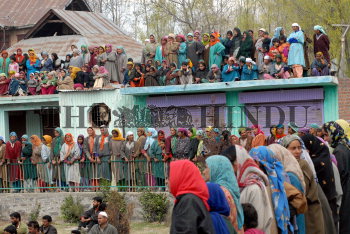 Caption : SRINAGAR, 18/03/2008: Residence of Dongripora in Anantnag District shouting slogans during the funeral of a militant namely Jehangir who was killed in an encounter between Security Force at Dongripora in South of Kashmir on March 18, 2008, at least 40 kms away from Srinagar city. Photo: Nissar Ahmad