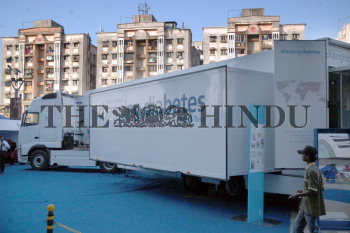 Caption : 16/03/2008 MUMBAI: A trailer bus of Novo Nordisk which is on world tour in Mumbai on 16 March 2008 in order to raise awareness on diabetes. The Changing Diabetes Bus is touring countries in Europe, Asia and North America over an 18-month period. The bus will stop at parliaments, schools, hospitals, pharmacies, convention centers and town squares. It is open to everybody, from those who know nothing about diabetes to healthcare professionals like doctors and nurses, as well as local politicians and government officials. Photo: Paul Noronha