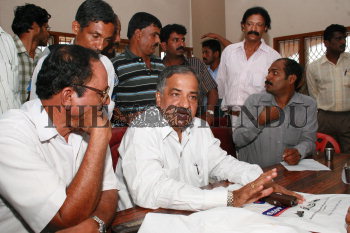 Caption : MANGALORE, 16/03/2008: MORE MONEY: Yashodhara Shetty (left) President of the Committee, VijayaKumar Shetty (second left) Honarary President of the committee. Office bearers of the new committe , formed to bargain for higher compensation for displaced people during an interaction with the press in Mangalore on 16th March 2008. Photo: R. Eswarraj