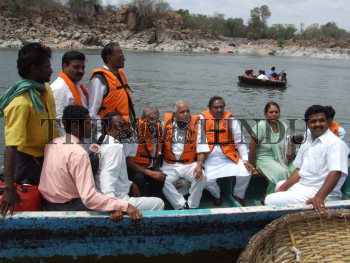 Caption : FOR DAILY:KRISHNAGIRI 16/03/2008. Bharatiya Janata Party (BJP) leader and former Chief Minister of Karnataka B.S. Yeddyurappa crossing into Tamil Nadu in a coracle at Manalthittu near Hogenakkal on March 16, 2008. PHOTO:N_BASHKARAN