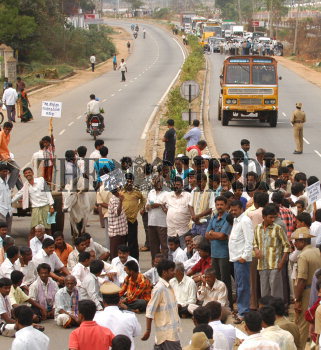 Caption : BANGALORE , 16/03/2008: Farmers from surounding villages of Shanamangala in Bidadi, blocking the Bangalore - Mysore State Highway in protest against the Karnataka Industrial Area Development Board's (KIADB) 1,000 arces of land acquiring in and around Shanamangala village, which borders between Bangalore District and Ramanagaram District, on March 16, 2008. Traffic on both the side was affected. Photo: K. Murali Kumar