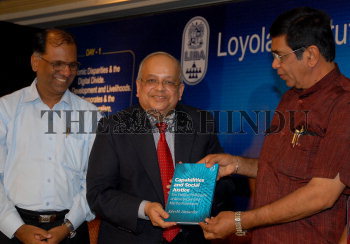 Caption : CHENNAI, 15/03/2008:DOING THE HONOURS: Minister of State for Labour and Employment Oscar Fernandes handing over the first copy of a book he released to V.V. Leeladhar, Deputy Governor, Reserve Bank of India, in Chennai on March 15, 2008. P. Christe of LIBA is in the picture. Photo: M. Vedhan