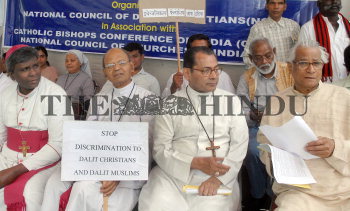 Caption : NEW DELHI, 14/03/2008 : NDA Convenor George Fernandes seen with Delhi Arch Bishop Vincent and other Bishops from all over India during a protest march against non inclusion of Dalit Christians and Muslims in Scheduled Casts list in New Delhi on Friday, March 14, 2008. Justice Rangnath Mishra has recomended for their inclusion. Photo by_Rajeev Bhatt