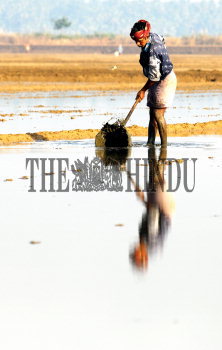 Caption : A farmer engaged in his paddy field near Thrissur, Kerala. Recent survey and studies of land ownership and distribution patterns in Kerla reveal that over 33 per cent of the people of Kerala have no land of their own. studies also reveal an abnormal concentration of land in the hands of the richest 8.8per cent of the population lease land farming is taking place on at least 1.5 lakh hectares of which Kudumbashree self-help groups are cultivating crops on over 57,000 acres (23,085 hectares) with government sanction. Photo: K_K_Mustafah 14/03/08