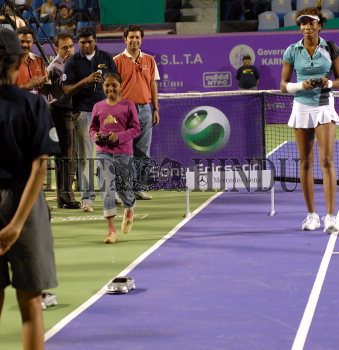 VENUS WILLIAMS PLAYING A REMOTE CAR GAME WITH A CH

Caption : BANGALORE, 06/03/2008: Venus Williams of United States playing a remote-controlled car game with a child after winning the match against Shuai Peng of China in the Canara Bank WTA Bangalore Open tennis tournament at the KSLTA Courts in Bangalore on March 06, 2008. Photo: K. Gopinathan