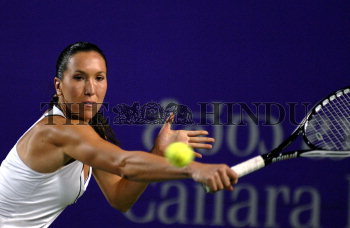 Caption : BANGALORE, 06/03/2008: Jalena Jankovic of Serbia in action during her match against Sanda Mamic of Croatia (not in pic) in the Canara Bank WTA Bangalore Open tennis tournament at the KSLTA Courts in Bangalore on March 06, 2008. Photo: K. Gopinathan