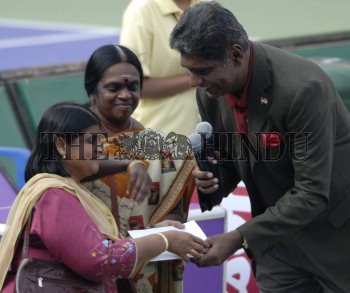 Caption : BANGALORE, 06/03/2008: Tennis legend Vijay Amritraj (right) presenting a cheque for US $ 10,000 to Madhu Singhal of Mitra Jyothi (a Bangalore-based NGO) before the singles match between Venus Williams and Shuai Peng at the Canara Bank WTA Bangalore Open tennis tournament at the KSLTA courts in Bangalore on March 06, 2008. Photo: K. Bhagya Prakash