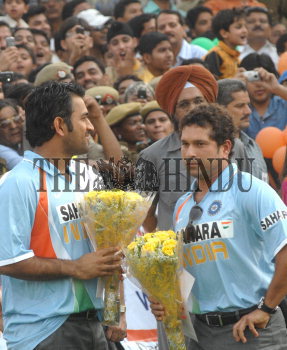 Caption : NEW DELHI, 06/03/2008: Indian cricket captain Mahendra Singh Dhoni (left) with Sachin Tendulkar at the team's felicitation function by the Board of Control for Cricket in India (BCCI) for its victory over Australia in the CB tri-series held in Australia, at the Ferozeshah Kotla ground in New Delhi on March 06, 2008. Photo: Rajeev Bhatt