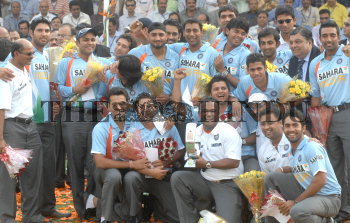 Caption : NEW DELHI, 06/03/2008: Indian cricket team poses for a group photograph at the felicitation function by the Board of Control for Cricket in India (BCCI) for its victory over Australia in the CB tri-series held in Australia, at the Ferozeshah Kotla ground in New Delhi on March 06, 2008. Photo: Rajeev Bhatt