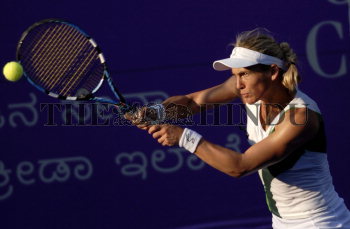 Caption : BANGALORE, 05/03/2008: Sybille Bammer of Austria in action against Anastasia Rodionova of Russia (not in pic) during the Canara Bank WTA Bangalore Open tennis tournament at the KSLTA Courts in Bangalore on March 05, 2008. Photo: K. Bhagya Prakash